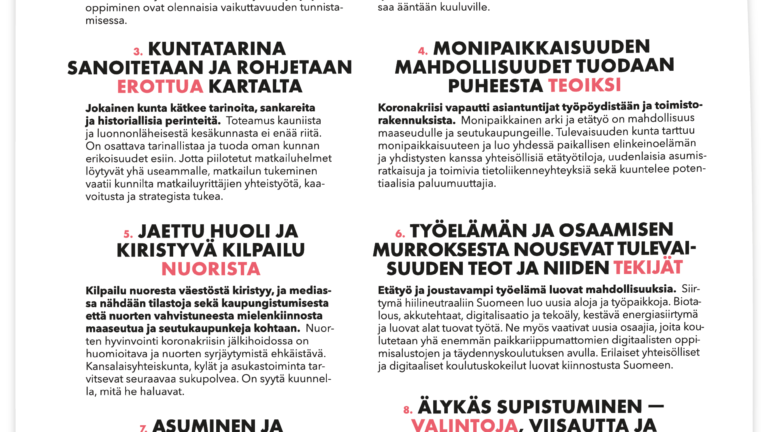 The election panel discussion of the HYVIS-project on 19th May 2021 brought together representatives of the various parties to discuss regional differentiation, the pursuit of the good life, diversity and the role of civil society. Contributions from all ten HYVIS partner communities and the eight largest parties at the last municipal elections were invited for participation in a panel discussion.

In the debate on regional differentiation, the important role of the state as a key player in determining the regional structure was strongly emphasised. Three speakers used the example of educational opportunities, the formation of which is particularly strongly influenced by government investment decisions. The panelists described the structure of the education system as hierarchical and regionally concentrated. For example, the locations of universities have defined and will continue to define regional development significantly.

“It’s clear that if there is a university in the area, the city tends to do well.”

Two speeches addressed the different dimensions of labour shortages. Although these are not the largest cities in Finland, employers may have difficulty with workforce skills shortages. The reasons for this that panelists raised were the gender segregation of occupations that influences family placement decisions, as well as misconceptions about the reality of small and medium-sized cities.

The role of the state was also highlighted in the debate on transport connections – in particular, the importance of commuting and well-functioning rail links to areas outside the city centres was emphasised in the speeches. In this case, the required investments are so large that the municipalities alone will not be able to influence them.

Active advocacy and networking work were seen here as presenting opportunities for municipalities. The debates in particular considered the relationship with the provincial centre to be important. This emphasises the importance of interaction and communication skills as well as system-level perceptions as part of the daily lives of municipal decision-makers.

“Cooperation with the provincial centre is especially important. What matters is the networks and how they are used. ”

Candidates placed significant emphasis on individual interpretations of what constitutes ‘the good life’ noting that even those with multi-morbidities, for example, can still experience a good life. In the partner municipalities, for example, municipal surveys and, on the other hand, direct consultation are used to collect experience data. In one intervention, this was seen as an integral part of the council member’s role:

“And all of us council members are local residents. And all the feedback that is received from the residents is the follow-up … ”

Two speakers also raised the issue of inclusion which can, however, be seen as one component of a good life experience. In practice, however, monitoring of the good life, or in administrative terms well-being, is often linked to well-being reports which also emerged in the discussion. In one partner municipality, a safety perspective had also been added to the whole and the municipal representative used the term welfare, health and safety plan.

This underlines the observation made in several interventions that it is difficult to trace the monitoring of the good life to just one measure. The indicators must be versatile and contain both qualitative and quantitative data. However, the dominant indicators remain economic and employment-oriented.

The practical manifestation of multi-location in several municipalities is the desire of leisure residents to turn their dwellings into all-year-round dwellings. Opportunities and obstacles in this regard have been examined and identified in almost all partner municipalities. This debate opens the door to broader structural questions relating to diversity and the fluency of everyday life.

Three speakers raised the issue of what the development of multi-location will mean in the future from the point of view of tax law. Thus far, there has been little enthusiasm for any form of ‘dual-municipal’ fiscal model on the part of the state, but state preparation and investigation are still necessary. The income perspective crystallises the contradiction in the high mobility of the population: summer and leisure residents as well as seasonal workers enliven several municipalities during a limited period of the year, but the administrative structures of municipalities represent the idea of ​​a static taxpayer and service user. Municipal administration structures and financing solutions do not always meet the needs experienced by the municipalities. The participation of part-time residents in cottage or seasonal workshops could also be increased.

“One way to develop things further could be some kind of multi-local jury, or a leisure resident jury, where we talk to people who spend a lot of time, but don’t yet live, in the municipality. ”

With the Covid-19 crisis, the importance of telework has also increased. One partner community has had a project underway to provide teleworking facilities for free. Another panelist noted that old municipal buildings and state office buildings could be turned into telework hubs providing suitable premises for work and where you could come from, for example, a second home to work. From the perspective of teleworking however, the limited functionality of Internet connections in many parts of Finland remains a significant challenge in this respect.

The HYVIS poster compiles a checklist to support ‘the good life’

Based on the panel discussion and the HYVIS dialogues, we produced a poster during the municipal elections for candidates, association actors and those working in municipal strategy to support the strengthening of the conditions for the good life and diverse vitality. The HYVIS dialogues successfully brought together local communities, associations and village actors enabling them to participate in a joint discussion during the project.