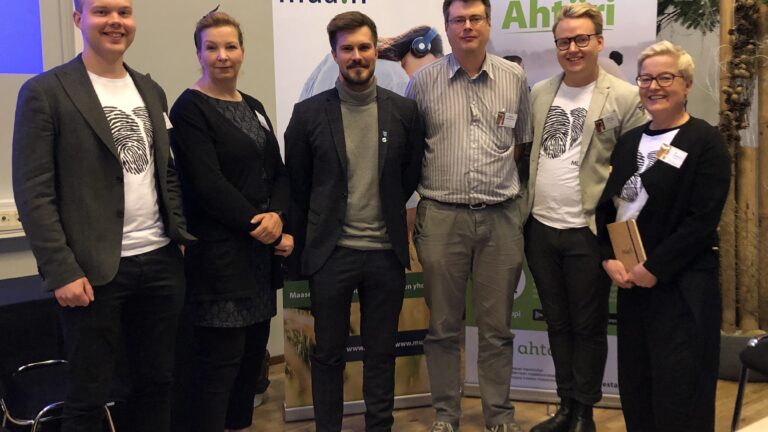 The Rural Researcher Meeting brought together around a hundred rural researchers and developers for a two-day event in Ähtäri from 22 to 23 August. The event was organised by the Finnish Society for Rural Research and Development MUA celebrating its 20th anniversary.

The theme of shrinking regions in MDI is close to us and current in many different projects, including: In the evaluation of our Leader activities in cooperation with the Ruralia Institute. Our expert Samuli Manu started the panel discussion with a brief overview of his own interpretations of the preliminary findings of the evaluation.

“Strengthening the democratic characteristics of Leader and ensuring that all groups receive an adequate level of funding will contribute to the potential of Leader to support a good life in rural areas,” said Manu.

The government programme of Antti Rinne, especially the rural part, was an important topic of discussion. The programme contains a lot of promises and overall it looks quite good from a rural point of view. The government’s objective is to develop the whole of Finland. However, it is unclear who, in practice, will ultimately deliver on these promises.

Rural vitality was considered from both traditional and new perspectives. People do not simply live to work, the ’good life’ can also be a legitimate goal alongside economic and employment development. The big question is whether general critical prerequisites exist for a good life or is it ultimately a subjective experience.

In the context of demography, the subject of immigration raised significant debate. From the point of view of the workforce, the panel highlighted work-related immigration – which is essential for the future of Finland as a whole and international networking – which is important. Critical voices were also heard: does everything, like population, need always to grow?

The rural-urban relationship led to a debate on the strengths of the countryside, highlighting the nature and the tourism-based opportunities it offers. In the future, nature and local tourism trends could be utilised even more than is currently the case. Wonderful places to discover and exciting activities to try exist all over Finland even in small municipalities and villages. Importantly, these opportunities can best be advertised and productised through ‘storytelling’.

Access to education, especially higher education, was seen as a key factor in the relationship between cities and rural areas. In this sense, the countryside is partly dependent on cities. The need for educated people exists everywhere in Finland. Indeed, access to education remains a key conditions for vitality in different areas. Moreover, the division into rural and urban areas is not schematic in the sense that people continue to transit these increasingly imaginary boundaries between urban and rural life on a daily basis for work purposes.

All in all, the panellists’ discussion was lively, the audience was engaged and in the end, our time came to an end – the debate could have gone on and on. In retrospect, the panel showed that the discussion is very easily rooted in the traditional concepts of vitality, even though the intention is to frame the phenomenon in a new way. However, based on the good feedback from the event, there is clearly a demand for alternative perspectives and we intend to continue our work on shrinking areas and the ‘good life’ concept.